Posted by hooplahicktx in Uncategorized on May 31, 2012

I don’t know how many of y’all have heard of Billy Bob’s, but it’s the Largest Honky Tonk that you can twirl under a rhinestoned saddle disco ball. Thursday’s are College Night and only 2$ entry with a live club band. On Friday & Saturday nights famous country folks stop by to woo and croon as you shake a tail feather.

But I’ve got the need to boogie, so I might just see y’all there…

While it’s a slightly touristy place, with a large gift shop, and bull for photos, it’s affordable and any age can get in early for tours and food.

If you’re anything like me you end up with leftover frosting (unless you’re a lick the bowl before decorating person) after every cake you make. This gets frustrating when a cup or so needs to be removed from your house before the sugar generously sticks to your thighs. I’ve got the recipe if you’ve got the event to take them! Otherwise you end up with tasty treats to eat.

Most people have seen cake balls, Oreo truffles, or similar sounding & gooey tasting. Most of you bakers have even made them. I’ve got a simple version that is hard to screw up. 3 ingredients, 5 tops! 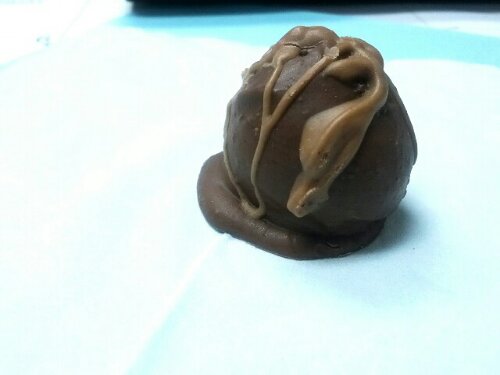 Directions:
Crumble cake.
Add frosting to your stand mixer. Beat on high until airy & supple. Add cake ⅓ at a time, beating until blended in between add-ins. Refrigerate while prepping next step.
Melt almond/baking bark in a double boiler (or pot & glass/metal bowl) on low. Slow & low is best to avoid scorched bark. Best results come if your water in the bottom pan does not touch the bottom of the top bowl/pan. Stir occasionally until completely melted.
Using a tablespoon roll cake/frosting mixture into formed balls. You can freeze them for short time periods if they become too soft to dunk. Remove double boiler from direct heat and drop rounds into the bark. Roll to cover & remove quickly scooped on a fork & tap gently to remove excess bark. Slide onto wax or parchment paper. Repeat until all are covered. Drizzle remaining bark over cooling balls.
Once hardened, peel carefully from paper (some bottoms will leave behind residue) & serve.
Store leftovers on wax paper in an air tight container in the refrigerator. You can stack wax sheets.

You may not have leftovers, they disappear quickly…

Saul told his son Jonathan and all the attendants to kill David. But Jonathan was very fond of David and warned him, “My father Saul is looking for a chance to kill you. Be on your guard tomorrow morning; go into hiding and stay there. I will go out and stand with my father in the field where you are. I’ll speak to him about you and will tell you what I find out.”

Jonathan spoke well of David to Saul his father and said to him, “Let not the king do wrong to his servant David; he has not wronged you, and what he has done has benefited you greatly. He took his life in his hands when he killed the Philistine. The Lord won a great victory for all Israel, and you saw it and were glad. Why then would you do wrong to an innocent man like David by killing him for no reason?”

Jonathan did not just warn David in private but stood & spoke against his father the king who erred against God & his Anointed One. This is just how Christ is portrayed in the New Testament. The world has sinned against an innocent man.
Question for you: “Have you taken this view of Christ?”

Some travelling Thursdays aren’t of me going far away or doing expensive things, mainly because I don’t have the funds or much time for the great big world around me. But thankfully I can still do the little trips. The local things. The community things.
Something I did tonight.

I visited the American Legion Post #71 for their first Field of Heroes opening ceremony. This honor ceremony celebrated POW, MIA, KIA, & Veterans. There was an Army Colorguard to present the flags & God Almighty had a strong wind whipping the 125+ flags in a fervor.
To participate, you donated $20 for an American flag to be flown this weekend in honor of a current, past, or personal hero. Name, branch, etc. I dedicated it to my cousin Row who served Air Force until recent retirement. At the end of Tuesday you are able to pick up the flag & take home to fly. 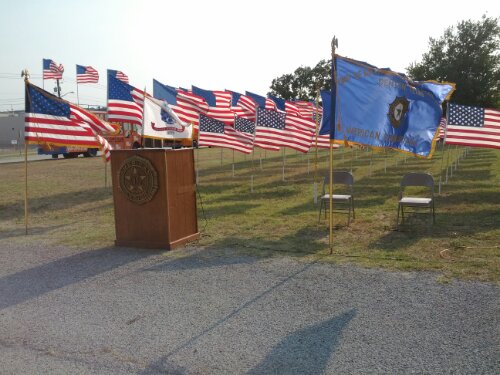 How will you honor & celebrate this Memorial Day weekend?

Stealing recipes; it’s what I do!

I’ve never thought you had to have all your own homemade recipes to be creative or classy. Sometimes in life someone does something so well you can’t help but copy cat! I found said item on smitten kitchen’s blog. I had a friend celebrate their 25th last week & I was itching to create. So I begged them (truly) to let me make a dessert item for them. I lucked out & was given two classic ingredients: chocolate & peanut butter!
So I went to my trusty search engine & got to searching. Lo & behold too many delicacies popped up on my screen. A little drool may have dropped. But near the top two blogs stood out: one had gathered her favorite chocolate & peanut butter desserts (many came a close second) & another had a photo of this gorgeous layer cake playing peekaboo.

Obviously, the cake won out.
I erred twice of importance.
1. When freezing said cake layers, do not stack even with wax paper & zippy bags. No matter what.
2. Do not lose track of sifted powdered sugar in the peanut butter cream cheese frosting, it looks tacky (legitimately).
Oh maybe one more almost error, stir the ganache constantly. It was a close save. Truly.

But hey, people devoured this cake like it was the air they breathed. That is a happy baker. 🙂
Chocolate Peanut Butter Ganache Celebration Cake

Jeremiah, in a land without God

Posted by hooplahicktx in Sermon Snippet Sundays, Verses on May 20, 2012

The Book of Jeremiah is written about captivity in Babylon, & how false prophets were attacking the people with the wrong type of hope, false insecure hope. Jeremiah tells the people God’s true purpose here:

For I know the plans I have for you,” declares the Lord, “plans to prosper you and not to harm you, plans to give you hope and a future. Then you will call upon me and come and pray to me, and I will listen to you. You will seek me and find me when you seek me with all your heart.

When you seek after God he will distinguish the true hope from the lies Satan names as his hopes, because God only seeks to bless you in eternity more.

Great Outdoors: Parking It in The Grass

Posted by hooplahicktx in Local Yokel, Travelin' Thursdays on May 17, 2012

In most places Spring is still sprung. Sadly in Texas we’ve already crossed into dangerous territory called summer. So here in the South West (because Texans don’t call themselves Southerners) we folks are migrating either indoors for expensively cool activities, towards large bodies of water,  or towards hours of the day most call dawn & dusk.

So here’s a question for y’all who have 4 seasons each year:
What is your favorite activity/game you play in the grass during warmer months?